Skip to main content
Back to articles
17th Sep 2021 by Josh Matthews, HBA

A personal reflection on the events of 9/11, its relation to MASECO and how it changed the course of my life 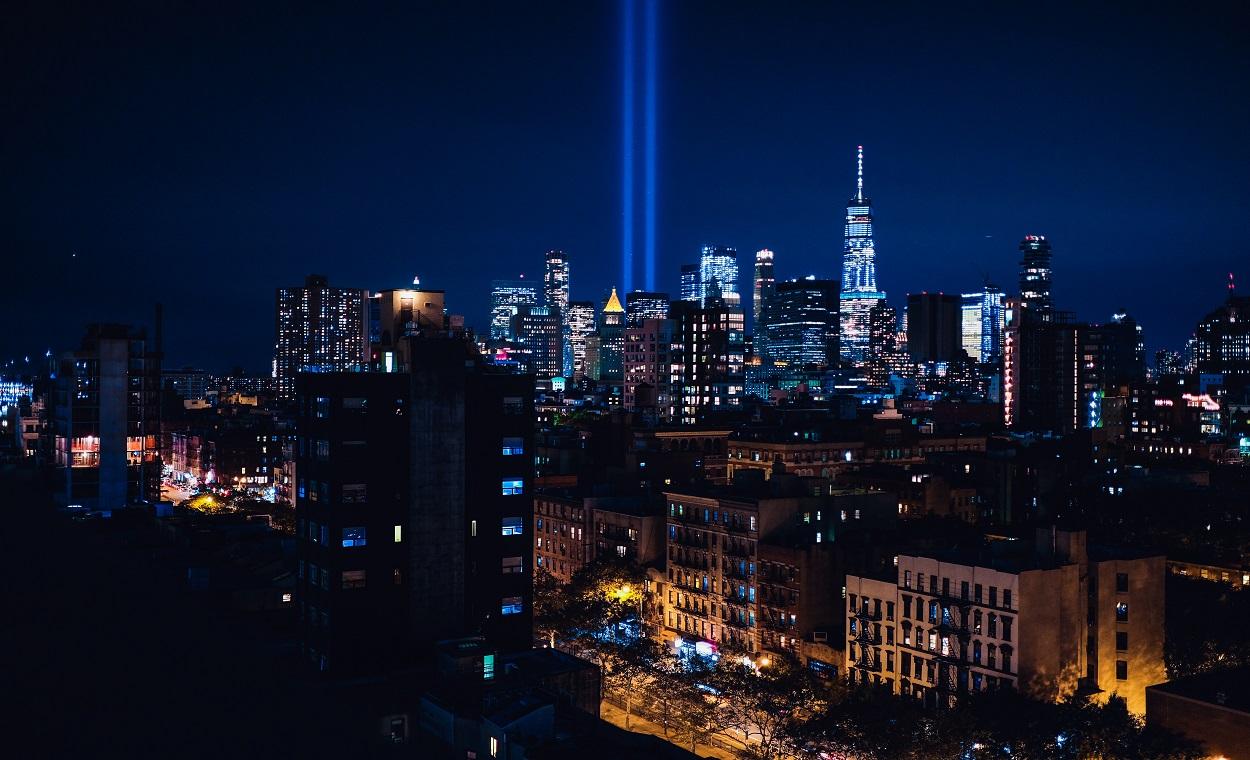 As we remember the effects of 9/11 20 years on, Joshua Matthews, Co-Founder and Managing Partner, shares a personal reflection on the September 11 attacks in relation to the birth of MASECO and how it affected the course of his life.

My wife and I are watching a new Netflix series on 9/11, how it changed the course of American politics and the ‘war on terror’ in the past two decades and we have been discussing how 9/11 changed our lives and what the past 20 years would have looked like for us had it not happened. I am sure you will read many more sombre and commemorative blogs about 9/11 this week, but this year, I have decided to write a more personal blog that is the result of some of my discussion with Holli and how it changed the course of our lives.

Salomon Smith Barney NYC
Holli and I moved from Montréal to New York City in late 1997 and I was working in the private client group at the Park Avenue branch of Salomon Smith Barney. My team managed the stock option plans for various Fortune 500 companies and primarily I helped their top executives, who had sold highly appreciated company stock, with their wealth management needs.

Exiled from the US
In early May 2001 I was summoned to my branch manager’s office and was told that because I was Canadian and the company had me on the wrong visa, they would not be able to renew my visa and that I would need to leave the company.  After digesting the shock, my team leader and I spent the next couple of weeks mapping out a plan where I would move with Holli to the new London office for one year as a manager and then return to New York on a different US work visa. So, on May 10th the movers packed up our apartment and off we flew to London for what we thought would be one year.

Five months later, on the morning of September 11, everything changed as I watched the TV in shock as the WTCs were hit by planes and crumbled. I will always remember being paralysed and dumbfounded when I watched live as the second plane hit the south tower and the shock and disbelief of what I was seeing. The third building to fall in NYC that evening was WTC 5, the former headquarters of Salomon Brothers and where my HR files were destroyed with thousands of others. Thankfully no one was in the building when it collapsed. At the time, no one knew the short or long term consequences of these terrorist attacks, but everyone knew the world had changed forever.

Recession in NYC
In the following months, the US invaded Afghanistan and the US fell into recession. As New York City struggled to rebound from the tech wreck and terrorist attacks and many people left, Holli and I struggled with a sort of ‘survivors guilt’. In the meantime, the U.K. not only avoided recession, but London grew in importance as the securitisation and the consolidation of Europe marched on. By the time our ‘one year abroad’ was coming to an end, our New York offices had bigger problems to sort out than getting us back and we were told to wait. The wealth management business in the US struggled in the early 2000’s as the US stock market fell by more than 35% over the course of three years.

‘Stuck’ in London
So, we were ‘stuck’ in London for at least another year or two (no one knew) and decided to make the best of it. In October 2002 we were blessed with the birth of our first born and moved into a house. We had been living in flats for the past 5 years and Parsons Green was a great neighbourhood with a lot more living space than our apartment on Park Avenue in NYC. It was also in 2002 when I started to help Americans living in the U.K. as many clients started referring to me their American friends and family. To the best of my knowledge, I was one of the few wealth managers in London with years of US centric knowledge, experience and qualifications. At the time SSB had a USD platform with USD mutual funds, IRAs, 529s, 1099 reporting, etc which didn’t appeal to Brits or Europeans but did to Americans.

The MASECO Group @ SSB
By 2003 things were going well at (what was now) Citi Smith Barney, the markets started rebounding, we were settling into life in London, but post the events of 9/11 things were still tough in NYC, so I stopped nudging NY about transferring back. Now that I was more focused on staying, I struck an arrangement with Citibank to help with their US clients and started forming a team. A year later, James Sellon and Emilia Chachulova joined the team and ‘Team America’ was born. We also joined forces with my old buddy from the Park Avenue branch, Rich Correra, and we combined our names and called ourselves The MASECO Group.

Non-Dom Tax Law Changes
The group grew quickly over the next few years until 2007, when Gordon Brown announced sweeping changes to the U.K. Non-Dom tax laws. By early 2008, it was clear that Americans living in the U.K. needed a comprehensive tax strategy to complement their investment strategy due to the impeding U.K. tax law changes. Citigroup felt that this was not a core part of their business proposition and by early summer, Citigroup closed the London office, moved their US clients to a New York office and let us go. After having spent months trying to find a home for the team and our clients, no firm we spoke to was interested, so MASECO was born on the eve of the Global Financial Crisis. James, Emilia and I started the London business and Rich stayed in NY and moved to Merrill Lynch who provided us with custody for clients.

U.K. Reporting Status Funds
Now our clients’ needed tax efficient investments. Luckily, earlier that year I met an American by the name of Sam Adam who was the Head of Financial Services at Dimensional Fund Advisors (DFA) in the U.K. I explained to him the U.K. tax problems with US mutual funds for Americans living in the U.K. and explained how a year earlier, I had persuaded Templeton to apply for U.K. reporting status for two of their US funds. As an American, he understood the issue and worked with us to get U.K. reporting status on a dozen or so US based DFA funds. This was the holy grail of tax efficiency for our American clients and off the back of this effort, MASECO had a unique industry leading solution for Americans in the U.K.

Growth
Over the next 12 years, I had two more children, we opened up offices in Geneva and Zurich, two colleagues moved to Hong Kong where they opened MASECO Asia and I established MASECO Asset Management. In London, James & I grew the team from 5 to nearly 80 people; we added an offering for Brit and other Non-Doms; the partnership broadened out to those who were instrumental in our growth.

B Corp
In 2013 off the back of discussions with my old friend, Barry Martin, in Toronto, MASECO revamped the company’s principles and applied for B Corp status. Later that year, we were certified as the first financial services in the UK and a founding member of the B Corp movement in the UK which now includes thousands of UK companies.

I have always been a big supporter of the environment and have been a Green Peace supporter since I was 13 years old and have driven an electric car since 2006. Becoming a B Corp and investing in a sustainable manner seemed like a great way to express our beliefs in the corporate world based on our personal values. Although we were a very small firm and our efforts were modest, we started making charitable donations to various charities for every new client we took on in attempt to make the world a slightly better place.

Reflections
Reflecting back on the past 20 years, had it not been for 9/11, Holli and I probably would have almost certainly returned to New York City in 2002 and our lives would have been very different. Needless to say, 9/11 had a huge effect on the direction of our lives and I suspect the same is true for you or other family members. Although we were exiled to London and stayed longer than originally intended, we have been very fortunate. Of course, not everyone was as fortunate and the reverberations of those attacks can still be felt today both domestically and abroad (just turn on the news and see what is happening in Kabul). We will never forget that terrible day and always remember and commemorate* those fellow New Yorkers who died on 9/11 twenty years ago.

This document may not be copied, forwarded or otherwise distributed, in whole or in part, to any other party.  The views expressed herein do not necessarily reflect the views of MASECO as a whole or any part thereof.  All investments involve risk and may lose value. Your capital is at risk.

MASECO LLP (trading as MASECO Private Wealth and MASECO Institutional) is established as a limited liability partnership in England and Wales (Companies House No. OC337650) and has its registered office at Burleigh House, 357 Strand, London WC2R 0HS.  The partners are Mr J E Matthews and Mr J R D Sellon; Mr D R B Dorman, Mr H Q A Findlater, Mr T Flonaes, Mr N B Tissot, Ms A L Solana.  Telephone calls may be recorded for your protection.  MASECO LLP is authorised and regulated by the Financial Conduct Authority for the conduct of investment business in the UK and is registered with the US Securities and Exchange Commission as a Registered Investment Advisor.