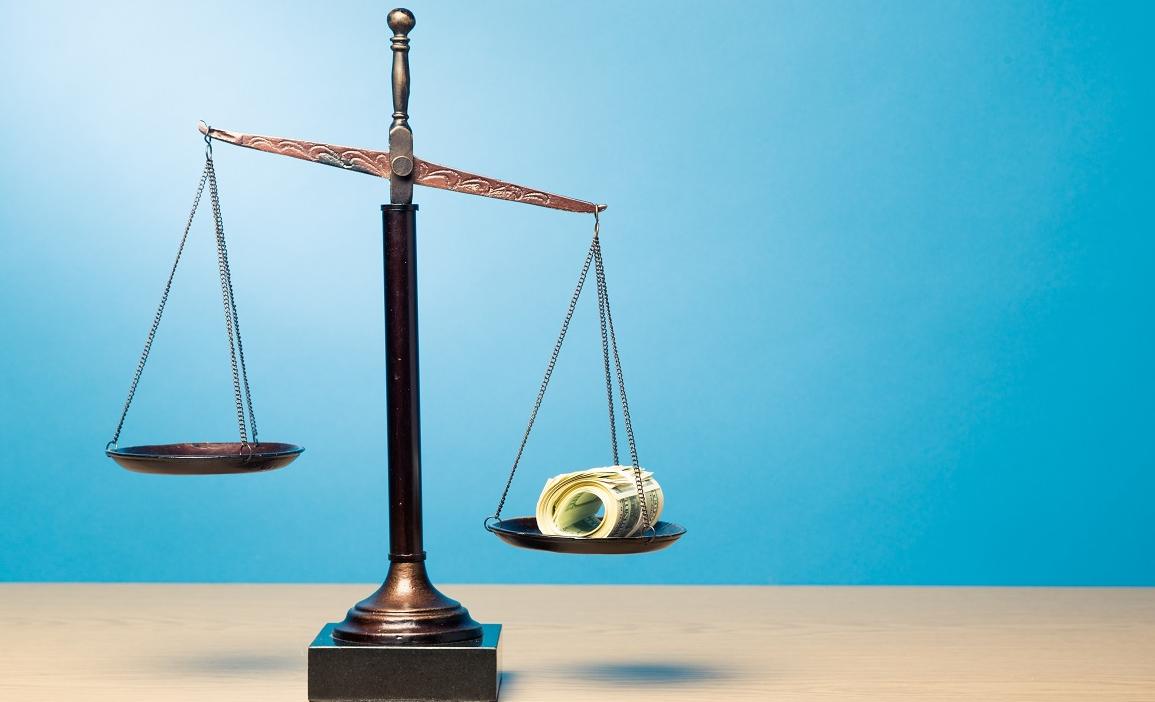 In 2017, the Trump Administration passed the Tax Cuts and Jobs Act (TCJA) which drastically cut corporate tax rates from 35% to 21%. While arguments can be made for some reduction from 35% (e.g. to improve the global competitiveness of American businesses or to encourage businesses to repatriate some of their earnings to the US), the tax cuts reduced potential federal tax revenue at a time when the US economy had experienced a decade of positive GDP growth following the Global Financial Crisis. , Senior Wealth Manager, discusses the effects of lowering corporate tax rates.

As the Biden Administration continues to walk the proverbial tightrope in an attempt to pass a $1.9T (yes, that’s Trillion with a ‘T’) bipartisan infrastructure deal through Congress, attention has been temporarily diverted from the topic of tax reform since Republicans in the Senate have stated they will not vote for a bill that involves increasing taxes on individuals or corporations. However, it is likely that this topic will be revisited in the near term when the discussion moves from physical infrastructure (i.e. roads and bridges) to care infrastructure which is what will be introduced in the American Families Plan (AFP).[1]  Reading the tea leaves, we believe that it is highly likely that the AFP will need to pass by budget reconciliation, a process in which only 50 votes are needed in the Senate with the Vice President adding the tie-breaking vote.  In the narrowly divided Senate, the Democrats can pass this legislation on a straight party line vote, as they did with the American Rescue Plan which provided additional COVID relief earlier this year.  So how will the AFP affect corporate tax?

In 2017, the Trump Administration passed the Tax Cuts and Jobs Act (TCJA)[2] which drastically cut corporate tax rates from 35% to 21%.  While arguments can be made for some reduction from 35% (e.g. to improve the global competitiveness of American businesses or to encourage businesses to repatriate some of their earnings to the US), the tax cuts reduced potential federal tax revenue at a time when the US economy had experienced a decade of positive GDP growth following the Global Financial Crisis: 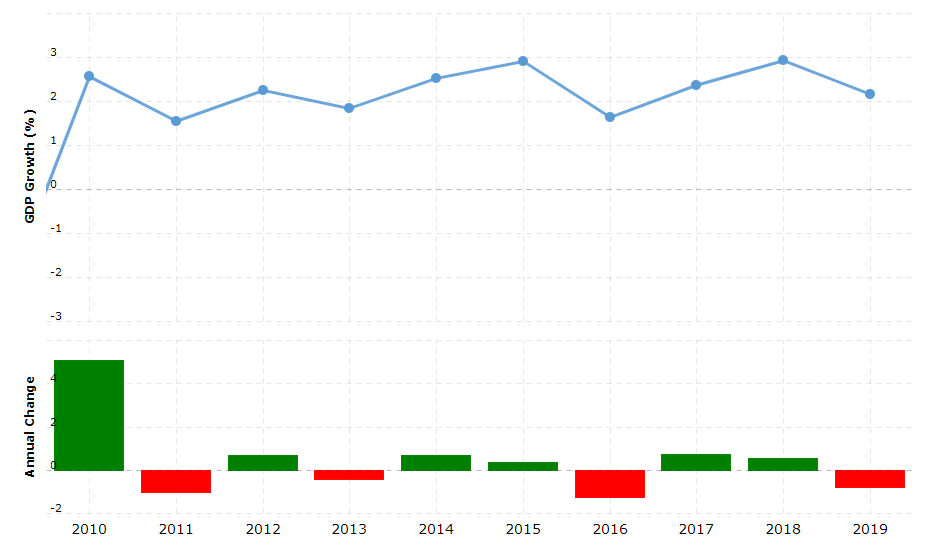 In fact, the Trump Administration tax cuts resulted in a 31% decline in corporate tax revenue the year following the passage of the legislation.[3]  This trend pre-dated President Trump’s tenure but was exacerbated by the TCJA which created more opportunities for corporate tax-dodging instead of closing loopholes.  The share of federal income tax has been steadily shrinking since the post-World War II era when approx. 35% of federal tax revenue came from corporations.  In 2019, the contribution from corporations was just 7%: 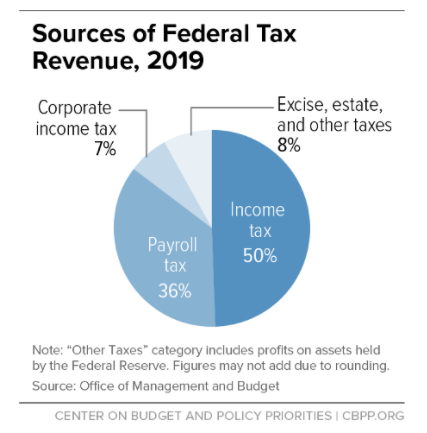 Source: Center on Budget and Policy Priorities, as of 31 December 2019; https://www.cbpp.org/research/federal-tax/where-do-federal-tax-revenues-come-from

That tax burden has shifted to individuals in the form of income taxes or payroll taxes (approx. half of which come from individuals) as seen in the graph below: 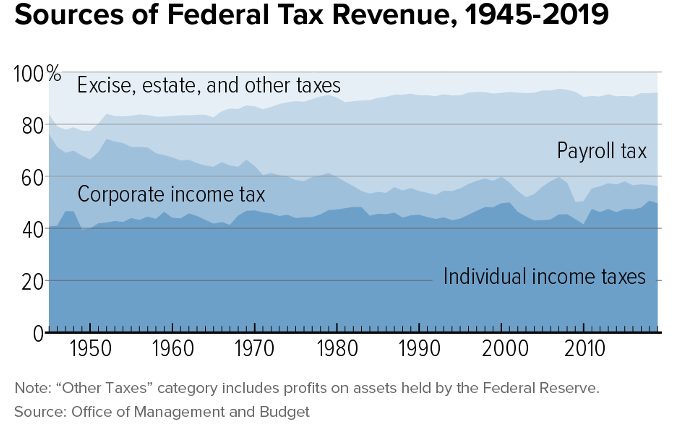 The Biden Administration would like to increase the corporate tax rate to 28%, still well below where it was pre-TCJA, but a 33% increase from where it is currently.  With centrist Democrats in the Senate like Joe Manchin balking at 28%, this rate could moderate closer to 25% during the legislative negotiations.

In addition, with Treasury Secretary Janet Yellen spearheading the effort, the US is advocating for a global minimum tax of 15% for corporations operating in developed economies around the world.  This is in response to multi-national corporations using clever tax loopholes, such as taking aggressive deductions and keeping profits offshore in low or no-tax jurisdictions.  These practices, while perhaps legally defensible, are generally not in the spirit of the tax code, and in some cases, the abuses have been egregious.  Thanks to recent news reports, we have learned that 55 publicly traded companies (including Fortune 500 companies and those listed in the S&P 500) with a combined $40 billion in profits paid $0 in federal income tax[4] in 2020.  Some of those companies had paid no tax for three consecutive years.  The Institute on Taxation and Economic Policy (ITEP) reports that:

If those 55 companies had paid the statutory 21% corporate tax rate on their 2020 profits, their collective tax bill last year would have amounted to $8.5 billion. Instead, they received a combined $3.5 billion in tax rebates.

In comparison, the federal minimum wage has not been increased from $7.25 since 2009.  So, while workers are paying a larger percentage of their gross income in the form of income or payroll tax, corporations are exploiting the cheap labour and paying virtually no tax to contribute to the wellbeing of those workers to support social mobility or initiatives like healthcare or education reform to improve the overall standard of living for local communities.

We believe that this trend is not sustainable and we saw the disproportionate effects of having such a bifurcated economy during the K-shaped pandemic recovery.[5] It’s time for corporations to contribute to the wellbeing of the society and workers which afforded them the opportunity to thrive and become prosperous in the first place. We know now that trickle-down economics doesn’t work,[6] and the alternative of continuing to give corporations a free ride will be be far more costly to individual taxpayers or the federal government in the long run.

All of the material published on MASECO LLP’s website or via social media is protected by copyright law.  You may view the material for your own personal use and you may share the material where it is indicated that this is permitted to other parties for their personal use only.  None of the material nor contents may be used for commercial purposes.  You may only share articles in the form in which they appear on our website.  You are not permitted to take an extract from an article and distribute the extract, for example, by cutting and pasting content into an email.

Risk Warnings:
•    All investments involve risk and may lose value.  The value of your investment can go down depending upon market conditions and you may not get back the original amount invested.
•    Your capital is always at risk.
•    Although the information is based on data which MASECO considers reliable, MASECO gives no assurance or guarantee that the information is accurate, current or complete and it should not be relied upon as such.

Performance:
•    Past performance is not a reliable indicator of future results.

MASECO LLP is authorised and regulated by the Financial Conduct Authority for the conduct of investment business in the UK and is registered with the US Securities and Exchange Commission as a Registered Investment Advisor.